The Bi-Black Sheltie & The Tri-Color Sheltie

Interesting tidbit: Statistics show that black dogs in general are less likely to be adopted from a shelter than any other color.

Strange but true. I guess we as humans are constantly discriminating for unfathomable reasons. Black dogs can be as loving and sweet as white dogs. But that’s another topic….

To me, the less common black sheltie embodies Shakespeare’s line: “A rose by any other name would smell as sweet.”

2) Why are there less of them in the Sheltie breed?

To answer the first question, I will preface it with the note that this is just my opinion…

That is the case for Annie, my little tri-colored girl. Which is not to say I don’t like her for a myriad of other reasons, just not her expression.

Then there are the blacks that have the look I do like. Take my Hobo for example. In spite only a miniscule of white on his face, I find his expression soft and inviting.

I had no intention of keeping him when his litter was born, but the longer I kept him the more I liked what I saw. Which explains how I have too many boys for the number of girls I have. 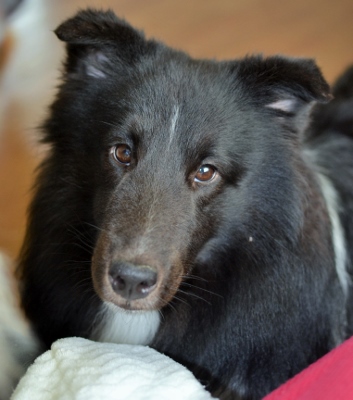 So, is just personal preference what keeps the bi-black numbers low? To answer the second question, probably not. Unlike other breeds, the Bi-black gene in Shelties is the most recessive of the three colors. In other breeds, black is dominant.

This color Sheltie is called bi-black because it carries only two colors on it, black and white. No tan.

Now there is some dispute as to whether the bi-black and the tri-color are two separate genes or whether there is only sable and black genes in shelties with a separate gene for a dominant tan points marking.

How To Produce A Bi-Black Sheltie

In either event, the only way to get a Bi-Black Sheltie is to have the resulting puppy inherit a bi black gene from both mom and dad.

So, if you have two Tri-Colored parents (dominant gene) each with a hidden (recessive) black gene, you could end up with a few Bi-Black shelties in the litter.

I got Hobo by breeding my tri-color girl with another tri-color. Therefore, both must have had the bi black gene behind them.

Let’s look at some puppies Hope has produced so far. She had been bred to a blue merle, a tri-color and subsequently to a sable male:

Just from the resulting pups, I can guesstimate Hope’s color coat genetics: one Tri-Color gene/ one Bi-Black gene, and a white factored (or piebald) gene. (Though, honestly there is a tiny part of me that still thinks she is a cryptic merle. Some thoughts die hard.)

From looking at her I also know she has the Irish pattern (white markings that are on her feet, chest, tail tip and neck)

The possible combinations allow for only 25% of the puppies to express the Bi-Black gene. All the other combinations, having at least one dominant Tri-color gene produces a pup that expresses Tri-Color.

Now this punnet square is a percentage of a lot of pups over time. It doesn't mean that for every four pups born exactly one will turn out as a Bi-Black sheltie. It's a roll of the dice as to how the genes from Sire and Dam will combine.

If your head is spinning, not to worry. Again, no matter the color, the personality is still Sheltie through and through!

Let's Move On To The Tri-Color Sheltie

The tri color gene expresses itself as a dog whose body is mostly black, with some white and a little tan over the eyes, along the mouth and perhaps on the legs. It is the dominant gene over a black gene but recessive to sable.

It's the middle child, so to speak. 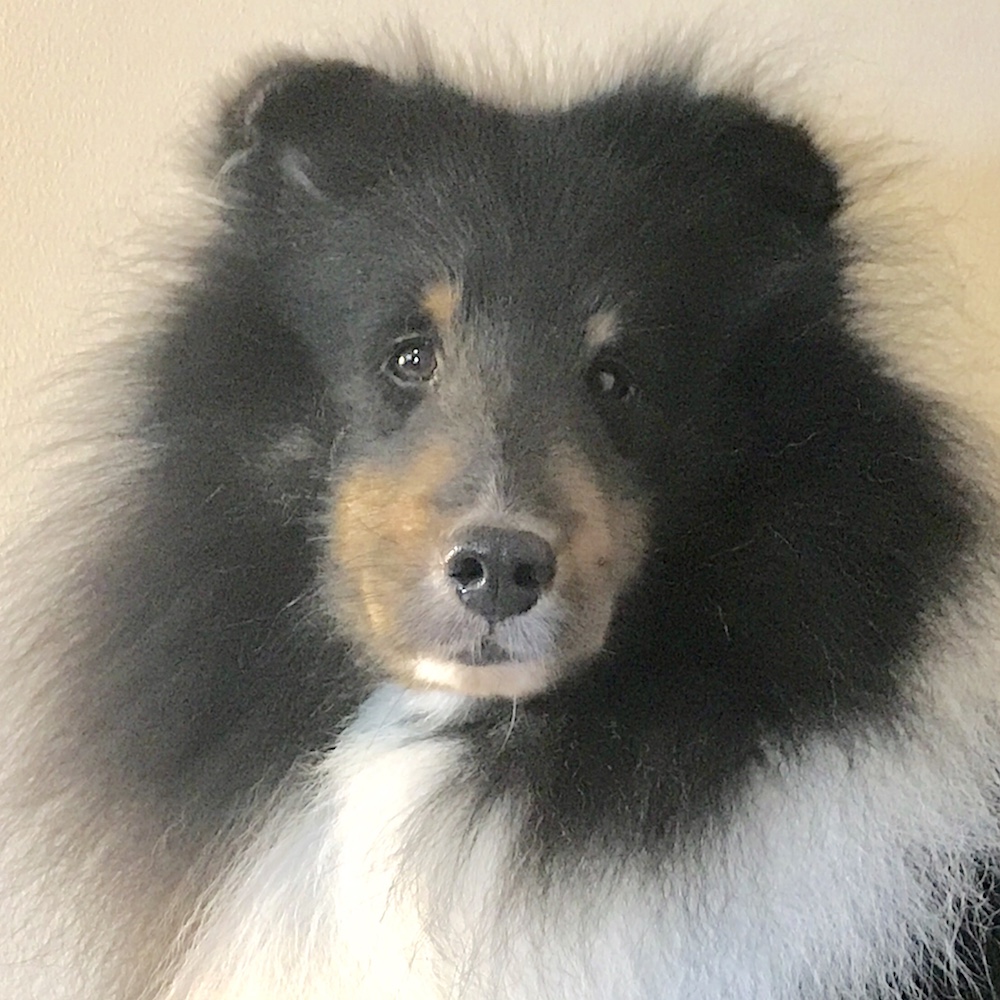 Unlike a mahogany sable, who looks similar from a distance, the individual hair follicle in a tri color sheltie is all black. The face is also primarily black with small tan spots.

If you look at the individual hair of a mahogany sable it is reddish closer to the root and ends with a black tip. Also, a mahogany's face is sable not black.

A Sheltie can be pure for the tri gene (meaning both genes for the coat color is tri color) or may carry one tri and one bi-black gene.

Two tri-color Shelties bred together can therefore produce not only tri-color sheltie puppies, but may produce bi-black shelties if both carry that hidden gene. (This was the case with Hope, who produced Hobo, my bi-black boy).

However, they can never produce a sable puppy.

You can see why it is handy to know what the colors of the parents and grandparents are, when it comes to breeding shelties. And yet, there are still surprises.

Still Confused About The Tri-Color Sheltie?

If the punnet square above wasn't clear on how genes are doled out (generally speaking) let me try another way. I’m not sure if this analogy will help or muddy things up even more, but let me try.

Because apples are “dominant”, even though I hold an orange, it is hidden, as if I put it behind my back. I still have it, you just can’t see it.

Let’s say I decide to have children with a guy who also carries one apple and one orange (behind his back).

To look at both of us you would think we are apple people. BUT, when we each give one gene to our child, we have a choice of giving an apple or an orange.

There are various gene combinations that the child could have:

If the child got either two apples or one apple and one orange, he would look just like an apple (just like his parents).

If he got the two oranges he would look like an orange.

Make sense? Or still as clear as mud? Yeah, I know, comparing apples to oranges.