What causes the lovely pattern of this sheltie is not a color gene but a modifier to any base color that a Sheltie may inherit.

You take a tri-colored dog, dip it in the merle gene and Voila! You have a blue merle sheltie. 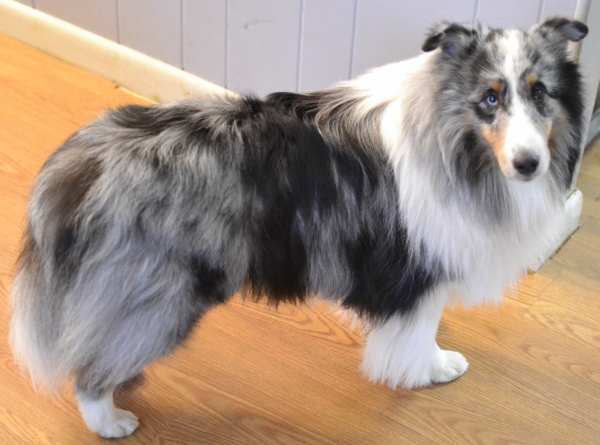 The gene affects the base color (either the black or the sable) of the dog by causing that mottled, splotched look with varying intensities and shades of color from black to deep gray to silver to light gray (did I hear 50 shades??).

It can also produce an even flecking of the colors as opposed to the large splotches. A dog that is called a blue merle sheltie retains the tan points over the eyes and mouth and legs.

Bi-Blue is different from the blue merle sheltie in that it is a black and white Sheltie with the merle gene so the coat is without any tan points.

A sheltie who was sable with the modifying gene and has splotches of sable, tan, and cream in varying amounts. Check out the three puppies on the left. Sometimes they have such faint markings as they mature that it appears a simple sable color. It is not as common as the blue because the possibility of blue eyes is a disqualification in the AKC conformation ring. 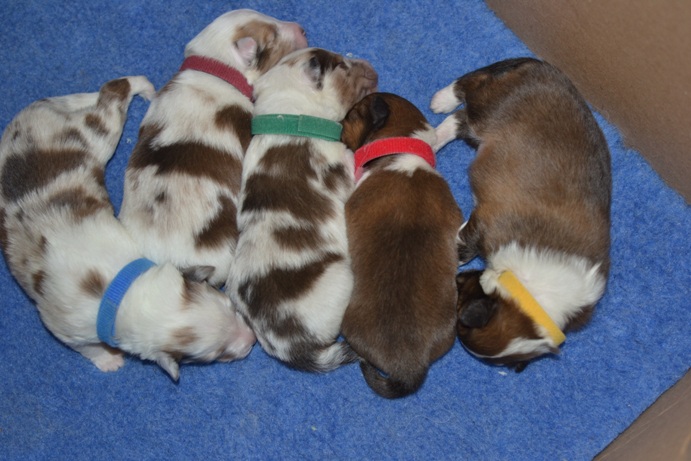 The Gene Can Cause The Eye To Change Color

This merle gene can also cause the dog to have one or both eyes blue regardless of the base coat color. These blue eyes are functionally normal. Sometimes one eye is partially blue and partially brown. That is called an “inclusion”. 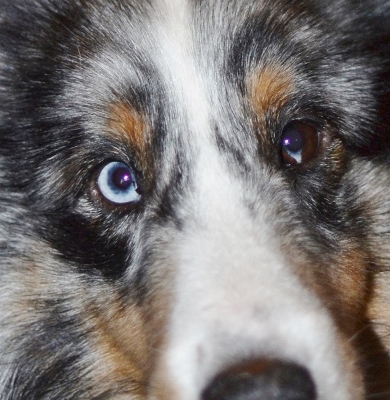 Sometimes, just to give Sheltie breeders a little more of a challenge when deciding who should be bred to whom, there occasionally is a dog that is a cryptic.

“Cryptic” means hidden. For example, a dog that may appear to be a tri-color sheltie, really carries a merle gene, but expresses it so minimally as to be easily missed.

At one point in time I seriously thought Hope was a cryptic as she produced 2 almost completely white pups when bred to a blue merle.

Both the sire’s owner and I combed through her coat almost follicle by follicle and found a few strange hairs, but so few as to be uncertain if they were simple mismarks or not.

I came to the conclusion that she is not a cryptic but probably both she and the sire are white factored (called piebald in other breeds). Although, strangely enough she has the same red eye reflection in photos that only merle dogs have.

OK Hope, you got some 'splaining to do!

Breeding two merle Shelties has serious repercussions. If two merle dogs are bred, puppies can possibly inherit a merle gene from each parent creating a puppy with two merle genes. Names for this genetic combination are: lethal white, double dilute, or double merle.

The coat appears primarily white with small amounts of very faint grays or silvers since there are now two merle genes to wash out the color.

While it can be quite beautiful to see, the lack of pigment in a double merle indicates there is no melanin wherever the areas with white coat occur on the body.

It is this melanin which allows the eyes and ears to develop normally while the puppy is a fetus.

Without the melanin, the eyes may develop very small, nonfunctional or even non-existent. The puppy may be born blind even if the eyes are a normal size. Without the melanin in the inner ears, there is also the possibility of deafness. 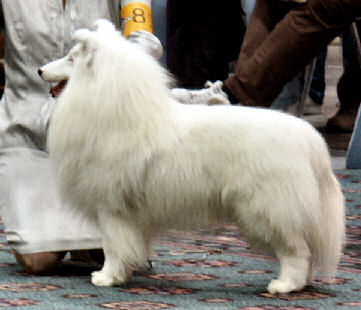 It is fascinating to me to see the link between two such traits of melanin and nerve development that I would intuitively think was unrelated.

Sometimes it’s an accidently breeding as when a merle dog is bred to a cryptic merle. A cryptic merle is a dog that carries the gene but expresses the merling so insignificantly as to go unnoticed by the owner / breeder until pups are whelped and there’s a white puppy in the midst of normal colored dogs.

Why Do Some Breeders Hope For A Double Merle Sheltie?

And while I’m all for a beautiful coat color, it isn’t something that I value so much as to take the chance of producing a deaf, blind dog. Quite honestly, coat color is pretty darn low on my priority list of traits I’m breeding for. But I make no judgments about other breeders programs.

Which is not to undervalue the spirit and the personality of any Sheltie, double merle or not. A blind, deaf dog exhibits an immense amount of courage and grace living in such a limited world.

There is a modifier of the merle gene which is the harlequin gene. This gene will turn the areas that are merle (dilute grays or silvers) into pure white.

Unlike the double merle sheltie, this genetic combination doesn’t affect the function of eyes or ears in spite of all the white.

Harlequin is a dominant gene but is extremely rare in Shelties and may be non-existent at this point in time.