For as long as I’ve been breeding shelties, it never gets old. It is exciting from day one. Waiting to see if the bitch is pregnant, watching her body change, and feeling the puppies moving in her belly, guessing how many puppies there are… WOW!

Then the scary part….

The actual whelping. While it is a controllable scary, the myriad of possibilities of what could go wrong is always in the back of my mind. I am lucky in that the shelties I’ve known are easy whelpers.

Nevertheless, if a bitch takes a little too long to go from stage 1 to stage 2 labor, I begin to worry. I guess it’s just my nature to take responsibility for those bitches in my care.

Do The Best You Can

If nothing else, a breeder should be there to offer support and a caring, knowledgeable hand.

After all, especially the first time, it is a big unknown process for the sheltie until instinct takes over.

I see whelping puppies as the culmination of all the work and testing that goes before. To produce dogs that aren’t healthy is just plain irresponsible. That’s why if anyone wants to join the breeding hobby using one of my dogs, I expect all the medical tests to be performed on male and female.

Yup, that means there is always the possibility they may not make the grade. That’s the reason you do it and the risk you take when breeding to improve the Shetland Sheepdog breed.

That being said, s**t happens. And occasionally, someone who didn’t expect to play midwife, now has to get through whelping.

The good thing is, it is a natural process and if the bitch is healthy and the breed is not one to require a c-section as a matter of course, whelping puppies usually goes well. Obviously, as a sheltie breeder, I can only speak to how things have gone for my breed.

There are a myriad of books you can read on whelping puppies, including this short booklet I wrote to help get you from point A to point B.

Get educated so you can be a help not a hindrance to your dam.

An old report documented that whelping unattended by the breeder causes a loss of an average of  1/3 of the litter due to a variety of complications that could have been averted with a helping hand. So be there.

Assuming as non-medical a model as possible, I feel giving your sheltie the best nutrition is paramount and the basis for easy whelping. Not just during pregnancy, but for her entire life.

Once the breeding has occurred, keep track of all important times, dates and temperatures so you know when to expect the puppies.

Of course, occasionally, you get a bitch like my Hope who takes whelping in stride and barely gives any behavioral hints she is ready to pop out puppies until she is in active labor.

She also doesn’t quite fit the pattern of temperature spike, then temperature drop right before labor.

Just one of her idiosyncrasies that makes me shake my head and love her that much more. She does it her way.

So with experience you will learn to be a little flexible with your bitch as well.

Once she begins the labor process continue to keep written records or it will be difficult, if not impossible later to remember when each stage of labor occurred, to know if she is getting into trouble.

In order to keep myself organized, I put together a few charts that I share with you in this little ebooklet. After all, staying focused on the goal is what its all about: producing healthy puppies and keeping the dam safe.

When Puppies Are Ready To Join The World

Usually, the first 2 weeks after whelping puppies is pretty simple for the breeder as the dam does most of the work. The breeder's job is to make sure that none of the puppies are beginning to have a problem with nursing or fading puppy syndrome.

But once puppies' eyes and ears have opened and they have gotten more mobile, I bring the puppies out from the quiet whelping room into the living rom where adult dogs, visitors, noise and new smells are something they can get used to. And then, even thought the dam is still nursing and caring for the pups, my job to keep the area and the pups clean kicks in.

And a simple "potty training" system can begin.

As newborns, the dam stimulates them to pee and poo by licking them until they are about 3 weeks old.

At that age, the pups start walking, and are able to urinate and poo on their own. This is when training pups begin. I use to attach a second box to the first with the common wall removed. This is to create an extended area used to relieve themselves and is covered in newspapers.

You can do it a variety of ways, the concept is to give the puppies a choice between a clean sleeping area and another pee and poo area.

I have transitioned to a double door large crate as I believe it gives the pups more visual stimulation by removing solid walls.

The “den” or sleeping / nursing area is soft fleece over newspaper and changed as frequently as possible to remove any smell of urine.

It is larger than the pups alone may need but the dam is still nursing them and so it has to be large enough for her to lie down comfortably with the litter. 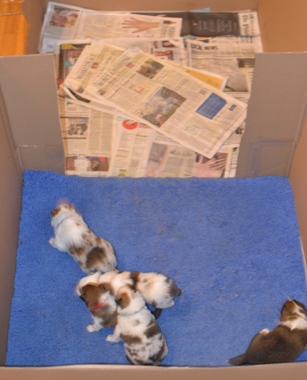 As the pups gain their “sea legs” about the third week, they begin to naturally move out of the sleeping area to go to the bathroom. They begin their own potty training. In the beginning they will not be able to get all the way out to the newspaper area before they go potty. They just don't have the control. But they improve with time and practice. 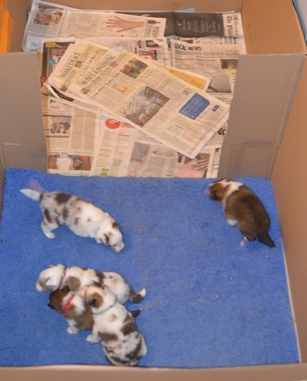 The extended area has newspaper that is allowed to stay somewhat soiled though frequently covered over with fresh paper to prevent puppies tracking urine back to the sleep area.

The pups smell the urine on the newspaper and are drawn to it when they need to relieve themselves.

At three weeks the pups are only awake for a few minutes at a time. Most of the day and night is spent sleeping or eating. 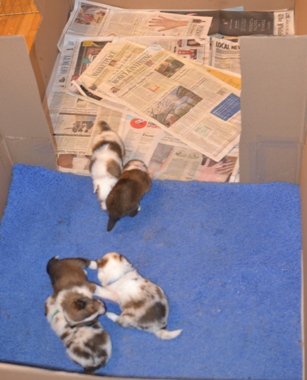 While there are accidents as they begin the learning process, by 8 weeks, they have learned so much more than pups kept in one confined spot with no defined areas for specific uses. You can take advantage of the early training the puppies have experienced when you continue potty training puppies at home. 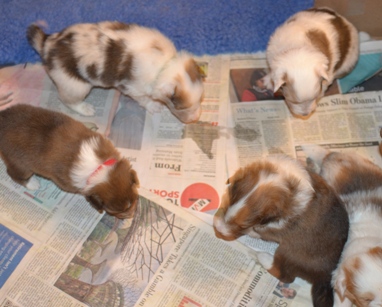 Another similar set up that I transitioned to relatively recently is using a large double door crate with a divider that I can separate the bedding from the pee area when they are very young, and then open up to a larger area  by opening one of the doors to allow them access to an exercise pen play area.

The crate has a divider that you can cut a doorway in which will divide the clean from the dirty areas.

Once the pups are older you can remove the divider and have the whole crate as the sleep area. Then add an exercise pen and open the second door for the pee/poo/play area. 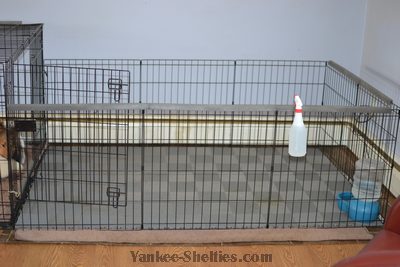