This is an eye disease very prevalent in collies, hence the name. It is also known by the more descriptive name of Choroidal Hypoplasia (CH).

Unfortunately, it is also shared with several other breeds to a lesser degree, including Shetland Sheepdogs.

It is a congenital, inheritable disease that is genetically recessive. This means if the dam or sire carry the gene, it can be passed on to puppies.

Those pups with only one defective gene will not exhibit the disease itself. They are considered carriers.

However if a “carrier” is bred to another “carrier” there is a chance that some of their offspring will inherit the gene from each of their parents and show the disease.

How Puppies Get It 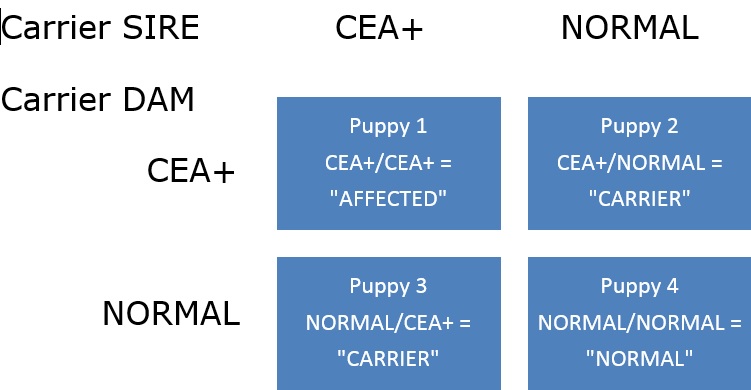 How To Test For It

Up until recently, there was only one way to determine if Collie Eye Anomaly in Shelties was present. That was with yearly CERF eye exams by a certified veterinary ophthalmologist. (ALL breeding stock at Yankee get this yearly evaluation.) While this exam would identify dogs affected by the disease, it would not determine any dogs that were carriers of the gene.

Now there is a DNA test that can be performed to find those carriers.

Using this information in breeding can assist in the control of the disease and prevent it from becoming as prevalent as it is in the Collie breed.

How Prevalent Is Collie Eye Anomaly In Shelties?

Presently, the incidence of CEA in Shelties it is approximately 0.4% (less than ½%).

So, for example, if there were 20,000 living in the USA, approximately 80 of them would have the disease.

How many more would be carriers is unknown and that is what needs to be controlled. The more unidentified carrier dogs used in breeding, the bigger the chance of getting affected puppies.

Careful breeding, however, can wipe out the disease completely.

Waiting until most of the breed has the illness makes it almost impossible to eradicate it without losing a huge portion of the gene pool. The time is now.

This is why I have decided to add this DNA test to the list of medical clearances my dogs will be getting.

Inside the eye, beneath the retina is the choroid, a layer of tissue is underdeveloped. The degree of underdevelopment varies greatly from dog to dog and from breed to breed.

It can be detected on ophthalmologic exam in very young pups (5-8 weeks old). Sometimes as they grow older it becomes more difficult to see the abnormality.

Depending on how mild or severe the lack of development of that area of the eye is, sometimes vision is severely affected, others not at all.

Genetic labs can do the DNA test for Collie Eye Anomaly for about $80.