How Yankee Shelties
Came To Be

Dog breeders have a bad reputation in general, mostly due to the concerted efforts of animal rights extremists. So I thought giving you some background on who I am would give you some confidence in dealing with me and my dogs.

I started as most people, with one dog as a pet, segued into performance competition (traditional Obedience trials) and wandered into the conformation side to watch the breeders with their brood.

Ding, ding, ding!! Bells went off at the thought of being as lucky as those exhibitors to have multiple dogs, to breed and raise them, improve the breed generation by generation, WOW!

But I was immediately turned off by the tongue lashing and finger wagging of the established breeders. Who was I to think I could know or learn enough to do what they did. SHAME ON ME!

I was young and not confident enough at that time to forge ahead. I got a Sheltie as a pet and companion and periodically tried to convince any show breeder of my interest in the Shetland Sheepdog.

Fast forward to 14 years later and my elderly Sheltie, TJ and I traipsed across the country to experience the Southwest for a few years.  Still not a breeder or exhibitor. Yankee Shelties was a long way off from existing. 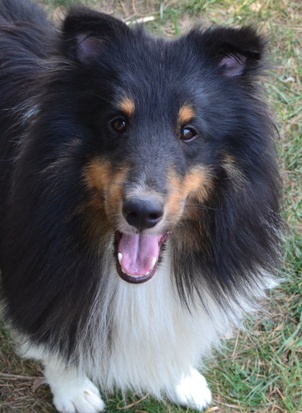 TJ died within the year, leaving me alone and open to new directions. I utilized my dogless days immersing myself in landscape photography; a wonderful hobby that fed my soul for a few years.

Here is a link to my Zazzle Store with the results of my wanderings sans canine companionship. I have made cards and apparel with the photos that can be customized with your information, so feel free to browse the store:

But I missed the companionship of a dog. Having a pristine home, clothes without dog hair and a deadly quiet space was not comfortable for me. I lasted a year and a half.

I began my search for a good quality sheltie that I could start showing in conformation and if good enough, breed as well. Again the established breeders shot me down. I decided maybe a different breed would suffice.

I spent my time showing in Obedience trials with my pet quality dogs. I watched ringside at the conformation ring. I got better at picking out what I liked or didn’t like about a dog. I practiced grooming for the show on my dogs. I asked questions of experienced exhibitors.

Eventually after years (and I do mean years), I found someone willing to sell me a show prospect puppy. This dog was a great Obedience competitor but nowhere near good enough to breed. I tried a second and third dog; all who grew into lovely pets but not what I needed to start my kennel.

Nope, no Yankee Shelties yet.

I tried my hand at breeding a few litters, hoping the pedigree would shine in the pups. I figured starting somewhere was better than never starting at all.

No luck. Knowing that my goal was to improve the breed, I spayed the girls and placed them in pet homes. Again.

Not that I didn’t care about the breed, but one can wait only so long to begin what, is in essence, simply a hobby. At that point, after agonizing over what I would call my kennel, I settled on Yankee as a description of who I am.

Yankee Shelties was born. (One friend thought "Hoity-Toity-Yankee-Bitch" fit me better, but that was a tad long for the registration papers, LOL!!)

During this time I continued to read about breeding dogs, puppy socialization, health and diet. I learned all I could about raising and training dogs, forming my own opinions as the time went by. I learned to “read” my dogs mental and emotional states. I used them to try out what I had read about dog health.

I had everything I wanted except a dog to show.

Where, Oh Where Can My Show Dog Be?

A series of dogs continued to be bought, grown out, shown in the conformation ring, and eventually spayed or neutered and sold as pets.  I was at least learning how to evaluate dogs for their qualities and faults. What used to take years to decide was becoming evident to me more quickly.

I spent lots of time over the years showing in the conformation ring only to realize the dogs I bought didn't have what it takes to be considered a Champion.

Thousands of dollars exchanged hands and years went by between each purchase. Three things struck me during those years: 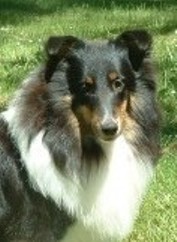 I found good pet homes for all the other dogs I had in order to concentrate on these two pups and try to erase this stigma of “backyard breeder” from my history.

The girl, Hope is my foundation bitch. She doesn’t have the prettiest face which is unfortunate considering Shelties are a “head” breed in the conformation ring. But she has a good body, a sturdy temperament and she was a good start. (Start?? Again!)

I brushed, groomed, trimmed and trained. I was willing to comply with the AKC rules which forbid using chalk, dye or other foreign substances to “create” a dog, but which is what every successful exhibitor does. Trimming whiskers off the dog seemed absurd.

I imagine that was one of many reasons why I never succeeded in the ring.

I was unable to finish Hope in AKC but was able to get her Championship in the UKC. (Most AKC show exhibitors pooh-pooh the UKC as they don’t allow professional handlers or “foreign substances” in the coat and are more family-oriented than AKC.)

Another Break For Yankee Shelties

Eventually, I was lucky enough to find a show breeder / professional handler locally that was willing to let me breed Hope to her Champion boy.

This was a first in the thirty years since I had been playing around with this hobby. The boy was CH Charbar’s Masquerade, NAJ.

I also began to show a dog belonging to a friend. I had none of my own to show at the time and I needed the practice. (I have trouble putting one foot in front of the other and looking graceful).

I came across another show breeder, Rose Marie, Granite Gables Shelties, who empathized with my decades long plight to find good dogs to show. She offered to keep me in mind with her subsequent litters.

Needless to say finding good, honest show breeders seems to be as rare as hen’s teeth.

I hired Pam Korcek the owner of CH Charbar’s Masquerade, to show a pup from Hope’s first litter. I wasn’t taking any chances of missing out on a golden opportunity to actually get somewhere in this sport.

JJ got 6 points towards his Championship title thanks to her.  I was able to get another few points on him as well. He was over half way there at the time of his retirement. 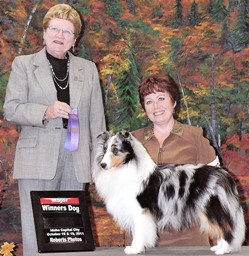 My decision to move back East was pretty much a point of starting over from scratch for everything EXCEPT the dogs. They all came with me. I was not about to lose the little I had gained.

Meanwhile, Rose Marie of Granite Gables ha come through with her promise. I purchased another bitch with the hopes of adding to my pack. Unfortunately, that girl was too small for the show ring. I tried one litter with her to see if what she produced would be worth keeping but in the end, that line of dogs did not pan out at all. Not for lack of trying.

Finally, retired, I am able to take this activity to the next level and focus on building a profitable, ethical business in dog breeding and if the gods smile on Yankee, try another dog or two in the ring if any look the part. 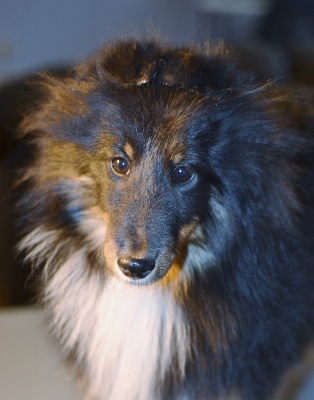 Yankee Shelties In A Nutshell

Yankee Shelties is just me and my dogs. I have made a decision that regardless of how other breeders behave in or out of the ring, I will maintain an honest and ethical stance for as long as I am involved with dogs. If that prevents me from winning in the ring, so be it. But I imagine it will attract only those who are like minded.

I am my dogs’ owner and staunch defender in this anti-animal ownership world.

They are my teachers and my heart.

What you see on these pages are topics I have lived, researched, experimented with, failed at and tried again for over 30 years. I know more than most people do about dogs but realize there is so much more I don’t.

If anything on this website is helpful to you, I’m glad. It’s a great way to use the internet.

That’s what Yankee Shelties is all about.

If you are interested in reading what other folks think about me and my dogs, I have a testimonial page to share their feelings and you can check out my Better Business Bureau rating..

And if you are wondering how I actually got this website up and running (it is truly a miracle, considering I didn't know squat about techie stuff), you can read a page on how I was able to build a website myself.