An example of a conformation dog show is the Westminster event. And while you may understand that each entry in this event is judged according to its breed standard, (hence the descriptor: "conformation" or adherence to the descriptions for each breed), you may wonder how a champion title is obtained. It takes more than one show to gain the points needed.

There is a set procedure to judge the entries and an elimination process to whittle it all down to the most worthy specimens. Each Registry, such as the AKC or UKC have their own rules.

Some of them are awarded points.

When 15 points have been accumulated, the title of CHAMPION (CH) can be added to the registered name. In other words, that specimen has "conformation" to the breed standard, judged by many over time.

Sometimes, if it is an exceptional specimen, and there are a lot of competitors, that will occur rapidly in only a few shows.

Other times, it can take years to get those elusive points.

The competition at a dog show goes beyond simple point collection with additional elimination that declares the best entry for the day… BEST IN SHOW.

Now the WINNERS DOG and WINNERS BITCH go back in the ring with any entries that are already Champions. The judge evaluates for the best of this class and that is BEST OF BREED (BOB).

If one of the WINNERS gets this title, they accumulate more points depending on how many Champions they beat.

Let’s say the BEST OF BREED is a male. The judge then decides which bitch is the BEST OF OPPOSITE SEX (BOS). That too gives extra points if the WINNERS BITCH were chosen.

That ends the competition within each breed. But it’s not the end of it by a mile.

So, for Shelties, they compete against all the other breeds in the HERDING GROUP. I’ve shown just a sample of each in the graph below for the sake of brevity. (I guess it’s really too late for that though, eh?)

First, Second, Third and Fourth place are chosen, but only FIRST place goes on to compete against all the GROUP winners for…. Drum roll please….. BEST IN SHOW!!

And you wonder why it takes so long to get through it all?

Just take two aspirin and call me in the morning. 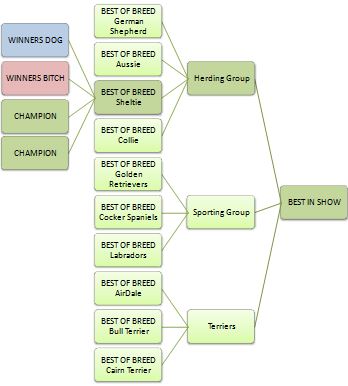