Sheltie Size Is A Crap Shoot

Breeders obsess about a lot of things, one of which is sheltie size. The breed standard calls for the Sheltie to stand between 13” and 16” at the withers (shoulders).  If not in that range the Sheltie is disqualified from the show ring.

It certainly doesn’t affect their health in any way. It’s just something that was agreed upon in the standard. Considering the breed originally stood a mere 12”, the increase in agreed upon size over the years makes for a different Shetland Sheepdog for sure.

I personally like the smaller Shetland Sheepdogs, but it is difficult to breed a good, “typey” specimen in the smaller package. As a fellow breeder once said, “Just one of God’s little jokes. You can’t have it all in one dog.”

While most breeders will sell a Sheltie not within the standard rather than use them for breeding, I’m not willing to throw the baby out with the bathwater.

For example, Ditto has everything that I needed in a Sheltie EXCEPT his size is too big. Considering he came from a small dam and a moderate sized sire, I wanted to see if he would throw some moderate sized pups just like him. Which he did.

Show breeders will keep a promising puppy and “grow them out” (i.e., keep them and watch them grow) to see if they will develop into the specimen they want for their breeding program.

One task is to measure the pup’s height weekly, starting at 6 weeks old.

We have a Growth Chart also known as the Nobel Growth Chart that gives us a general idea of how big the pup will get. It’s based on old time breeder’s records.

The pup’s height is plotted and if the height exceeds the safe area, there is a good chance the dog will go oversized. 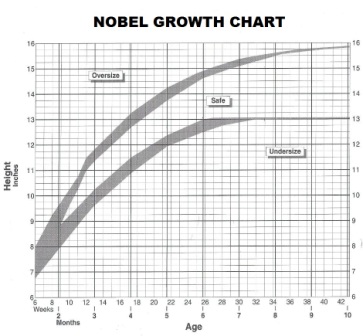 Click on the Nobel Growth Chart above to get an 8x11" chart that you can copy and use for your sheltie!! Plot his size weekly and see how he compares and get an estimate of where he will end up.

Of course just to make things interesting, some pups hit a growth spurt and scares the bejabers out of the breeder and then just as suddenly stops growing. So nothing is for certain.

The whole issue of size stems from the outcrossings with other breeds, most notably, the rough coated collie. That gave us all those nice “big” size genes that we are still to this day fighting to retain the correct Sheltie size.

How Do You Measure The Height Correctly?

Have them stand squarely and measure from the top of the shoulders down to the ground. Kinda the same way your mom may have measured your height as a kid, by using a ruler held horizontally on top of your head over to the wall. Then she'd scratch a line on the wall.

It can be tricky with a squirmy pup, but do it enough and they settle down.

You can also buy a wicket like most breeders use. Some are quite reasonable others can be pricey. But at least then you don't have to mark up your walls.

What About The Miniature Sheltie?

They also have a hard time with the phrase “mini collie” as shelties are NOT just a miniature version of the collie and are considered a completely different breed.

Shetland Sheepdogs, just like any other dog breed alive, DID NOT spring from the forehead of God exactly as it is today. Generations of men and women, let alone thousands of generations of dogs and selective breeding brought each and every one of those separate breeds into existence.

And then proceeded to be adjusted even further over the years.

The sheltie’s history as a breed is short and littered with all sorts of outcrossing to other breeds including collies, spitz, icelandic sheepdog, prince charles spaniel and pomeranian to name a few. Because of these outcrossings, the Shelties produced today are still pretty inconsistent with type, temperament AND size.

But before the outcrossings, shelties or “toonies” as they were called then, were about 12” tall. It essentially started out as a miniature sheltie breed.

My feelings are that returning to a more historical size is well within reasonable expectations.

Want a companion? Think about it. There is a whole class of dogs that was created out of other breeds, for the sole purpose of being lap dogs. And those breeders will defend to the death their right to be considered as legit as any working dog breed.

So I have a serious problem with people who start wagging fingers and stereotyping anyone as “disreputable”, “only in it for the money”, or “puppy mill breeder” simply because of their desire to move in a different direction with their breeding program the includes a focus on sheltie size.

I have seen enough established show breeders lie, cheat and manipulate in order to make a name for themselves. It’s a matter of the pot calling the kettle black.

I find it much more important to look at how a breeder is trying to accomplish their goal and also why. Sometimes, I bet some people would be surprised at the answers if they actually listened.

Will Finding A Miniature Sheltie Be Easy?

Understand that there is more to creating a miniature sheltie "breed" than taking two shelties, producing one or two generations of small shelties and calling it good.

Because (and excuse me while I laugh up my sleeve) it tain’t easy to get consistent results, especially concerning sheltie size.

Keeping the sheltie “look” is tough even if you aren’t watching size. It seems it is hard to maintain as you approach miniature sheltie size.

When you select for any particular trait, you have to be on the look-out for unexpected, seemingly unrelated changes in other genetic areas. They could be appearance, behavior or health.

And when they crop up you have to be willing to admit it and not keep breeding poor specimens just to keep size.

While I am not expressly looking to create a miniature sheltie, I am working to reduce the sheltie size down to the low end of the standard of 13”. I also want to improve the look of my dogs as I reduce size and maintain good health as well. It is a challenge and fun at the same time.

I have seen advertisements on occasion for Toy or Teacup shelties. I would think it is a matter of semantics in how one describes a petite size sheltie just as long as you are aware it isn't considered a separate breed.

All you have to do is look at the difference in size between the East Coast and the West Coast shelties. Then look at a British version. Look at the change of the breed's general appearance over the years.

I really don’t see a miniature sheltie ever being a separate breed so much as just a line of smaller shetland sheepdogs. But what does it really matter? "A rose, by any other name, would smell as sweet." I don't see any reason to get tied in knots over the semantics.