I’m going to say a few radical things on this page about procedures we all take for granted and consider in the best interest for our dogs. I’ll probably be burned in effigy by some. But what the hell….

If you read enough, you will find the traditional viewpoint that sterilization surgery is medically protective of our dogs against disease, is not as black and white as we would hope. 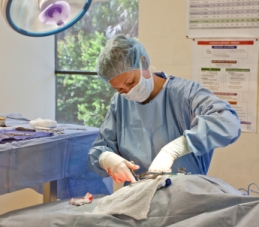 I’ve been told that spay and neuter surgery will reduce the possibility of breast cancer, prostate cancer, etc. in our Shelties. It sounds so good but there are conflicting studies out there.

Before I go into any detail, I want to state my position on this surgery for the pet population. I firmly believe that controlling the population of dogs and cats to a number that can be adequately cared for in this society is essential.

Unwanted dogs and cats are a travesty. (That is why I take back any Yankee Sheltie unwanted by their owners, at any time during their life, for any reason.)

Some form of sterilization, at some point in a companion dog’s life, is usually the most common alternative for most people.

I also question here the WHY, WHEN and the WHAT needed to accomplish the task of controlling the population.

With the "overpopulation" having been brought under control in the past few years (except for the hundreds of thousands of imports brought in by pet traders for sale), responsible owners shouldn't HAVE to spay neuter if they can be responsible and avoid any "ooops" breedings.

In order for these lovely Shelties to be a part of our society, they are sacrificing more than you may realize including their health.

But change comes slowly in established venues like veterinary or human medicine. So talking and asking questions, may eventually “turn the Titanic around” to a better course for our dogs.

Did you know that early spay and neuter surgery of dogs can cause:

OK, by now you are pulling your hair out, screaming, “All I wanted was a DOG for chrissakes!! You know, put a bowl of food down, a water bowl, they go play with the kids, sleep on the bed, chew a few shoes, and become part of the family! THIS IS JUST TOO MUCH TO THINK ABOUT!!”

Truly, I’m sorry. I feel your pain. And I’m not saying you have to do things differently than you are used to. I’m just saying this to the few folks that may be ready to re-think the wheel and able to take the extra steps necessary to protect their female Shelties from accidental breedings.

I do it to explain why I offer a greater flexibility to my puppy buyers than other breeders may be willing to do. Traditionally, dogs sold on a spay and neuter contract have the stipulation that the surgery needs to be done by 6 months of age.

I used to extend that to 24 months because the growth plates in a Sheltie's legs close at roughly 18 to 24 months. It also gives the dog normal hormone levels a little longer than traditionally. I have now removed the spay /neuter clause altogether. (Yes, I realize this is heresy!)

While the puppy you buy is still on a non-breeding contract, IF... IF.... IF you can be a responsible owner and keep your dog / bitch from breeding accidentally, you can keep your dog "intact" for his or her health for their entire life time. We should have a conversation on what it is like to own an intact dog first.

There are also alternative forms of sterilization as shown in the video at the end of this page.

I'm not saying that you shouldn't take into consideration what habits dogs have that you don't want to live with. I'm just saying, realize that the medical rationale is not as strong as we once believed and see why you do what you do.

As an owner of a Yankee puppy, you are NOT REQUIRED to wait that long, I’m just giving you the option.

I'd prefer you waited, but you are the owner of the dog. It's your choice.

Optional Ways To Spay And Neuter

To stretch your perspective a little further, now that we've talked about the WHEN of spay and neuter surgery, be aware that there are several procedures that could be done in place of removing both the uterus and ovaries in the female or the typical castration in a male.

They are just not the usual methods performed in this country.

So I am also calling into question WHAT type of surgery is performed.

But I think you’ve reached your limit for the moment. I’ll leave that topic for another web page….. J

Oh, what the heck... Here watch this: