Neuro-stimulation or “Super Puppy” exercise for newborn canines has been around for a while. In the debate over “Nature vs. Nurture” there are many studies that show the influence of environment in the development of both humans and animals.  While genetics plays a part in the final product, the environment is just as important.

Research has shown that what an individual is exposed to early in life while the neurological system is developing, will permanently affect behavior.

Some breeders, like me, intent on doing whatever it takes to produce the best pups possible, have performed these exercises on litters from Day 3 through Day 16 of their lives to gently stimulate positive changes in the pups.

All puppies will continue to develop neurologically until about 7 weeks old, after which they will be considered neurologically complete. That is where the idea that puppies should be sold to new homes at 7 weeks; because they would be neurologically developed but would not have had the opportunity to absorb any responses to environmental stimuli. Thereby giving the new owner the opportunity to mold the personality of the dog for themselves most completely.

These days, that opinion has been tempered with the importance of continued exposure to littermates and dam who can teach appropriate lessons on canine behavior and responses to various situations. And so, the time frame for leaving the breeder is usually 8 weeks.

More recently, some breeders feel holding puppies until 10 - 12 weeks is even better. This has yet to be objectively evaluated.

How Is the Super Puppy Exercise Supposed to Help?

The exercises stimulate the nervous system just enough, but not too much, in order to stretch the pup’s “comfort zone”.

It was stated that the exercise produces adults that have many physical AND psychological benefits over others. To read more in depth about the rational and benefits, read: "Early Neurological Stimulation" by Dr. Carmen L. Battaglia.

Since each pup is an individual, what may be an acceptable stressor for one will be overstimulation for another. Too much of a good thing can backfire. That is why there is a limit to the frequency and duration of the exercise.

This does NOT apply to the general handling; cuddling and personal attention puppies receive in general. The exercises are gentle stressors which are not in the same category.

What Are the Early Neuro Stimulation Exercises?

As explained by Dr. Carmen L. Battaglia, this particular set of exercises was developed by the US army and originally call “Bio-Sensor”program, used to improve the performance of army canines. The exercises consist of the following procedures once a day for 5 seconds only from Day 3 through day 16 of the pup's life:

The window of opportunity for these exercises closes at Day 16. Any attempt to play “catch up” would be useless. 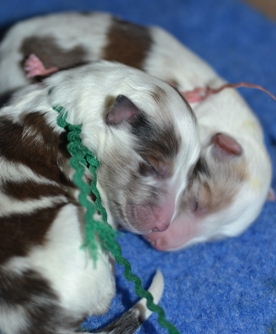 For many years I performed the ENS exercises on all my litters. I wanted to believe that I was doing everything I could to produce the best Shelties ever. But I had my doubts as to whether it was making any changes in the pups overall demeanor worth even the 30 seconds per pup that it would take.

After all, even though the instructions specifically stated that normal handling was not to be considered a substitute for these exercises, one has to wonder exactly why tickling the toes with a Q-tip for 5 seconds is more effective than the stimulation of say, holding the paw and clipping nails. Or why cuddling with a puppy is less effective than holding him on his back.

Being the troublemaker that I am, I went looking for the backstory; for the actual research done by the Armed Forces and found little. Just the same regurigitation of how great the Super Puppy exercises were but no data, no research reports.

There was a small scale repeat trial with the conclusion there was no discernible difference in the control group vs the group given the exercises.

A second article online gave a better understanding of what actually transpired and it appears the rationale for breeders to embrace this method to produce super puppies was grossly misrepresented.

According to the people actually involved in the BioSensor Program, things are not as they have been portrayed online.

Jeffrey Linn, DVM was deputy Commanding Officer, Army BioSensor Program. He stated that the early stimulation was performed during a limited time and no scientific studies with results were documented. The exercises as he remembers them were using mild centrifugal force, placement in a refrigerator for a short time and stroking their coat in the direction opposite from the natural lay.

These exercises came from using exercises Russian scientists had been doing  on children and on animals for space travel.  Unfortunately, the way the program was described in the news media caused enough concern that there were government inquiries which ended the program prematurely.

Dr Steven Lindsay had this to say: He did not recall the procedures outlined by Dr Battaglia but recalls the slow centrifuge and refrigeration for approximately a minute each.

Dr Michael Fox helped set up the BioSensor program and he never specified any particular time frame for puppies to be handled in this program. Neither was there any formal report on the program’s results if any.

Dr Eldin Leighton was a research geneticist in the Bio Sensor program. He recalls that due to the negative news coverage of the program, it was discontinued. There were no reports or testing of mature dogs to see what the results would have been.

Captain Arthur J. Haggerty also stated that the tests were based on what the Russians had done but could not replicate the results the Russians reported. He felt the good results of dogs produced were due more to the breeding program than the stress tests. He recalls early handling did in fact improve dogs outcomes based on others work but not during Day 3 and 16.

Mike Lister, Instructor, Ft Benning, GA was involved in training Mine Detection Dogs and received BioSensor dogs for training. He felt they were very intelligent but not suited for aggression work among other things. He could not bring any additional information on the actual procedures the dogs were put through before he received them at an appropriate age for training.

None of the people contacted had any memory of ever meeting Dr. Battaglia.

You can read the specifics on this page.

From what I have been able to uncover with great thanks to the original group that was able to contact the people involved, I no longer perform the Super Puppy, Early Neurological Stimulation, ENS exercises. Life is too short to waste time. While I don’t see any harm to the exercises, I’d much rather spend my time just handling my puppies as always throughout their first 8 weeks.