Another coat modifying gene is called the white factor gene in the Sheltie breed, or as near as I can figure out in other breeds, is called piebald. It is difficult sometimes to actually be able to tell if a dog has white factored gene.

FTC required Disclaimer: I receive commissions for purchases made through commercial links on this website in addition to selling from my own eStore. We are a participant in the Amazon Services LLC Associates Program, an affiliate advertising program designed to provide a means to earn fees by linking to Amazon.com and affiliated sites.

A larger than normal white tip on the tail or white running up the front of the stifle (back leg) are sometimes an indicator. But not always, as in Hope’s case.

This is quite different than the double merle discussed on another page.  The puppy is completely normal in every way including hearing and sight.

It is a dog with a head that is normally colored: sable, tri, bi, or blue merle and the body is mostly white with a few splotches of the normal color on the body.

Piebald can also cause blue eyes as the merle gene can.

I had a litter out of Hope, a tri-colored Sheltie. She was bred to a blue merle boy and produced 2 almost all white puppies as well as a few normal tri or sable puppies.

It scared the livin’ beejeebers out of me.

The sire was a white factored which was pretty obvious since he had the white coat going up his stifle.

But Hope, the dam was another matter. There was nothing to say she was white factored.

At first both the sire’s owner and I thought Hope might be a cryptic merle and had produced two double merle puppies. We saw a few stray hairs that might be white, might be merle, it was hard to say. 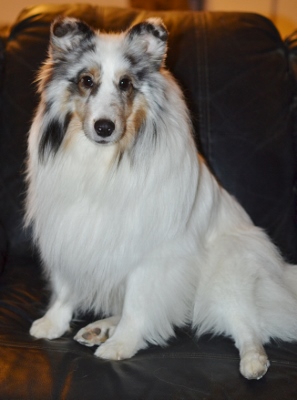 This is the color headed white sheltie that nearly gave me a heart attack when he was born.

Again, it isn’t a color I strive for, especially since it would be disqualified from the conformation ring, but they are equally as sweet and healthy as any other Sheltie.

And quite honestly I think the puppy from Hope’s litter grew up to be quite the looker. What do you think?

Yet another gene that affects the look of a sheltie’s coat is the typical Irish pattern which includes white markings on the legs, tip of the tail, chest and neck (full or partial ruff) with sometimes a white blaze up the muzzle. The amount of white in each area can vary greatly.

The Irish pattern is what makes Lassie look like Lassie. It’s the coloring that most pet families adore in their Shelties. I have understandably heard plenty of requests for a puppy with a “full white collar” as it is visually appealing.

Flashy Irish is thought to be a combination of Irish and Piebald genetically, as there is increased white.

Some breeders feel that a white collar that extends past the withers (shoulders) is incorrect for the breed and others feel it is a variation of the piebald gene expression instead of the Irish pattern.

It is believed that the Irish pattern was brought into the Sheltie breed when Collie crosses were done. It is also a common marking of the Border collie as you may know.

Ticking is the gene that creates the appearance of “freckles” on the sheltie white markings. It is a dominant gene. Generally noticeable only on the portion of legs that are white.

“Dominant”, as you may know, means only a gene from one parent is required in order to express that particular look.

If you have a yen to delve further into the genetics of coat colors for shelties, I highly recommend Sue Bowling’s page on genetics here. It explores the intricacies of the genetics and subtle difference of expression.

Quite frankly, the simple explanations I’ve given on this website are “broad strokes” kind of picture. I wanted to offer a relatively easy to understand concept of how all these colors are possible. Genetics is by no means a simple subject.

How About Further Studies On What Affects Coat Color?

As an example: There was a study on domestication of foxes quite a few years back. We all know the normal color and markings of a fox, right? Well, the study involved breeding the foxes in a way that the more docile ones were reproduced and the aggressive ones were not.

After several generations, even though coat color was not of any interest to the researchers and no selection was made for any particular coat color, it was noticed that the fox’s colors were changing.

(There were several other physiological changes in addition to the coat color.)

So, there are plenty of outside forces that will affect how any one gene shows up. Weird, huh? 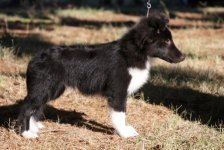